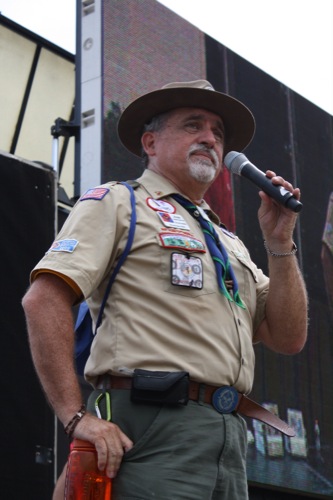 There are so many world records that are extremely dangerous (longest distance jumped by motorcycle; deepest scuba dive) that it’s nice to see one that’s for saving lives instead of endangering them.

That was the goal behind today’s attempt at breaking the record for CPR and AED training taking place at one time. Thousands of Scouts, Scouters, and visitors took an hourlong course on CPR and the proper use of an Automated External Defibrillator, or AED.

Results weren’t yet available, but one thing is for sure: sending thousands of boys and adults home with the knowledge about how to save a life was a winning situation for everyone involved.

Before one of the day’s courses, representatives from Cardiac Science awarded four lucky troops with two free AEDs.

These troops submitted winning entries in a video contest. Entrants needed to create a short video telling why AEDs were so important. Below you’ll see representatives from two of the winning troops. The first, Jose Lepervanche, didn’t work on his troop’s video, but he shared an inspirational story. He’s a Scouter from Jacksonville, Fla., and he shared the story about how an AED saved his life.

While at a council camp, he suddenly collapsed. Scouts rushed to his side and tried to revive him after calling 911. But fortunately for Lepervanche, the camp had purchased an AED and used it to save his life. He was there to tell his story because his camp was prepared, he said.

Because the troops got two AEDs each, they can keep one and give the other to a worthy community group, such as a school, church, or other organization.